Why do my bids get blocked?

Refers to native creatives only. We premoderate creatives with Adblade via API. If creatives are not approved, bids from them are blocked.

This blocker means that an advertiser is blocked by a publisher, therefore bids from this advertisers are blocked.

Example: There are 10 million bids available, 2 million of which are from publishers that have blocked an advertiser, i.e. this advertiser will not be able to send bids to these 20% of publishers, so 20% of bids are blocked. 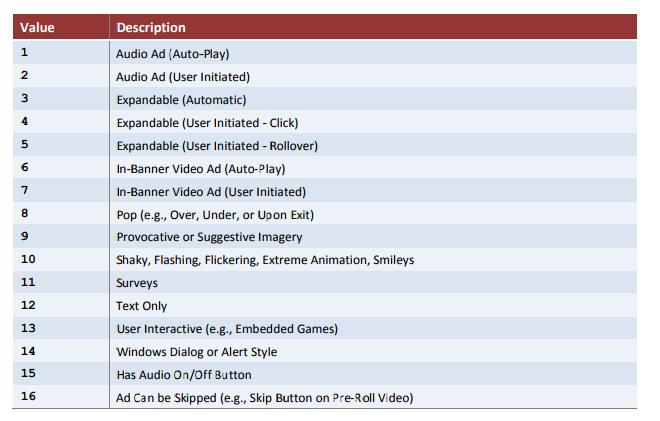 The share of bids blocked due to the price that is passed in a bid request by publisher (comparing to your campaign CPM).

Example: Your CPM is $0.5, but a publisher’s bidfloor is $1. In this case your bidding for traffic from this publisher is blocked.

This blocker is applied artificially to set a bid limit for a user in order not to exceed targeting per user cap.

This means we either limit or increase the probability of sending bids by your campaign.

This is an automatic system, so once you start actively bidding again, our system will increase the number of bids it receives.

Bids limited by blocked banner ad type as per OpenRTB specification. Please refer to the image below.

Example: Your budget limit for today is 10 dollars but it is only 3 p.m. and these 10 dollars has been already spent. In such cases bids from your campaign will be blocked after 3 p.m.

Blocks the bids if you set a campaign frequency cap (the number of times your ad appears to the same person).

Refers to the bids blocked due to mobile carriers out of your targeting.

Refers to the connection type:

E.g., targeting only Cellular Unknown will block bids to all other connection types.

Limits the bids due to the device chosen in a campaign (computer, mobile, tablet or other).

Example: If we have 10 million requests in total, and 8 million of them are from computer devices and you have chosen a mobile (or tablet or other) device, 8 million (80%) of bids will be blocked.

Refers only to the campaigns targeting Google DoubleClick as a supply source. Particular billing IDs belong to specific seats on Google.

If Forensiq score is chosen in a campaign, bids to publisher with high risk (as per Forensiq fraud detection) will be blocked.

Example: We have 10 million requests, 2 million of which were detected as fraud by Forensiq. If you have chosen Forensiq score, 20% of bids will be blocked.

You can send bids only to the GEOs whitelisted in the campaign. Traffic from all other GEOs is blocked.

This blocker means that you cannot send bids as other advertiser won the auction internally (within our exchange due a higher CPM).

Please note if you whitelist IPs you will be able to receive traffic only from these IPs.

Bids can be limited due to the settings applied to the network. Only in-network traffic means an advertiser can buy traffic from this network only (excluding traffic from the ad exchange (comprising all white label platforms).

Blocks bids out of the OS chosen in the strategy. For example, targeting Android will block bids you could potentially send to iOS.

Example: We have 10 million requests, 7 million of which are Android traffic. If you have chosen Android OS, you will be able to send bids only to 70% of traffic, so 30% of bids will be blocked.

Used only when Private Marketplace Deal is chosen instead of Open Supply at the strategy level. Bids to Open Supply traffic are blocked.

Refers to the creative type: HTTP or Universal (HTTPS). Bids to HTTPS bid requests with HTTP creative will be blocked.

Example: We have 10 million requests, 4 million of which ask for HTTPS secure type. If your creatives have HTTP secure type, 40% of traffic (4 million) will be blocked.

Block a portion of bids due to white/ black list of the sites chosen in the campaign.

Example: We have 10 million requests. If you have blocked some sites from which we have 2 million traffic, you will not be able to send bids to them, i.e. 20% of traffic will be blocked.

Please note if you whitelist sites you will be able to receive traffic only from these sites.

A cap set for a user to limit the number of bids per source.

Refers to the IPs that were detected by our system as providing non-human traffic.

Example: We have 10 million requests and 2 million were detected as non-human, i.e. 20% of traffic will be blocked and you will not be able to send bids to it.

Bids can be blocked due to the caps set for impressions and daily budget at the strategy/ campaign level.

Example: You have set daily impression cap at 1 million. Once your campaign receives 1 million impressions, the bids will be blocked.

As for a daily spend cap, if it is set at $100, this amount will be split evenly or asap in 24 hours (based on the parameters you've chosen), but it may also influence the number of bids you are allowed to send per hour.

Bids are blocked due Targeting per source setting in the campaign.

If you set daily impressions per one user (for example one visit per one user), the second and further visits will be blocked to this user.

Bids can be blocked because of timetable set for your campaign.

Example: If you choose a specific day to get traffic, traffic in any other day will be blocked.

It means that bids outside of the audience segments applied to the strategy for retargeting will be blocked.

Bids to useragents outside of your targeting are blocked.

Refers to the video duration declared in the video creative (15 seconds, 30 seconds, etc.).

Example: We have 10 million requests, 4 million are for 15 second videos and 6 million is for videos with different duration. If you have chosen to target 15 second video, you will be able to send bids to only 4 million of requests, i.e. 60% of traffic will be blocked.

This means that bids are blocked due to the video mime of the creative (video/x-ms-wmv, video/x-flv, video/mp4, etc.).

Bids that are blocked due to player size/ linear format/ content initiation/ audio parameter of your video strategy (“Video” tab in Targeting). 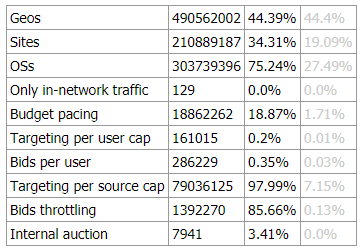